How we became vanlifers

“We’re not outdoorsy at all.”

“We don’t know anything about vans or automobiles.”

Would it surprise you to learn that these quotes came from one of our amazing Be-Van owners?

Social media and TV shows tend to depict vanlifers as only the most outdoorsy, adventurous twenty- and thirty-somethings. While there’s an undeniable attraction to vanlife for those particular demographics, vanlife isn’t exclusive.

On the contrary, it’s inclusive — vanlifers can be women or men alike, solo travelers and families, people in their 20s as well as their 60s (and 70s and even 80s!), those who grew up immersed in nature, and those who have never so much as been on a hike. In short, vanlife is for everyone.

Proving that very point, Be-Van owners Fallon and Justin bought their van during the pandemic, despite not being outdoorsy or risk-takers and knowing nothing about vans. In fact, Fallon told us she gets a lot of anxiety about mechanics because it’s something she doesn’t understand at all. Yet, she and Justin adore their Be-Van, a mint green Be-Home model named Joe. Fallon even went so far as to call herself a “van person!”

At Bemyvan, we’re committed to making vanlife accessible for literally everyone. We know Fallon and Justin’s story resonates with a lot of people and many of you wonder if vanlife could be the right move. And so, we interviewed Fallon to shed some light on how they went from never even having considered renting a van to being vanlifers in a matter of a few weeks. 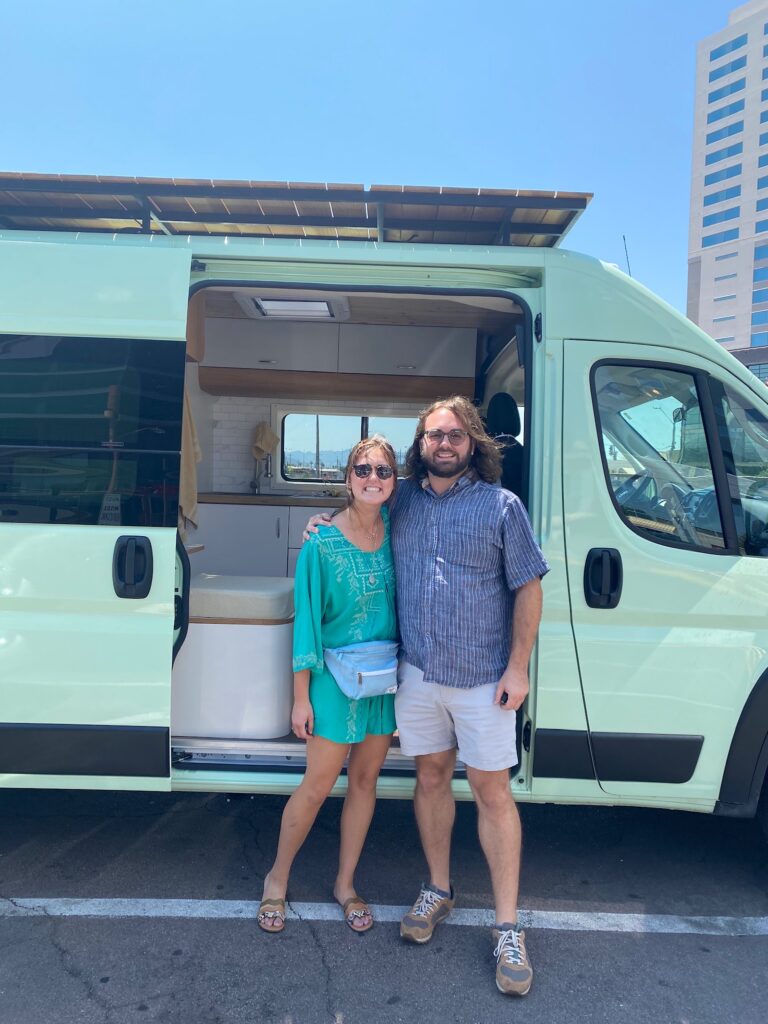 “The Best Risk I’ve Ever Taken”

So how did this Lubbock, Texas-based couple end up as van owners, with no prior outdoor or camping experience? Fallon explained that it was really a happy accident.

At the beginning of the pandemic, some friends (who, notably, are “not outdoorsy either and also don’t know anything about vans or automobiles”) rented a camper van and went to Yellowstone National Park. They, of course, had a wonderful adventure and came back raving to Fallon and Justin about how the van wasn’t at all “hard or scary or weird.”

Shortly after that, Justin’s cousin bought a big converted bus for his family. Similar to Fallon, Justin, and their friends, the cousin wasn’t outdoorsy and didn’t know much about vehicles. After he also had a great experience in his new rig, Fallon and Justin started thinking seriously about whether they might be interested in vanlife.

Despite having no previous exposure to camping or the outdoors, the couple had recently taken an interest in hiking. However, they consistently ran into issues where they’d travel somewhere to hike and were disappointed in the available lodging. Fallon explained that, like so many of us, they prefer “a cool Airbnb,” but oftentimes, there just weren’t any available.

Those increasingly-frequent occurrences, coupled with the rave reviews about vanlife from family and friends, led Fallon and Justin to decide that, yes, they could be vanlifers.

The couple dug into research. It wasn’t long before they found Joe, listed on Outdoorsy initially for rent, and made their down payment. Fallon said plainly that it was the “craziest thing we’ve probably ever done.” 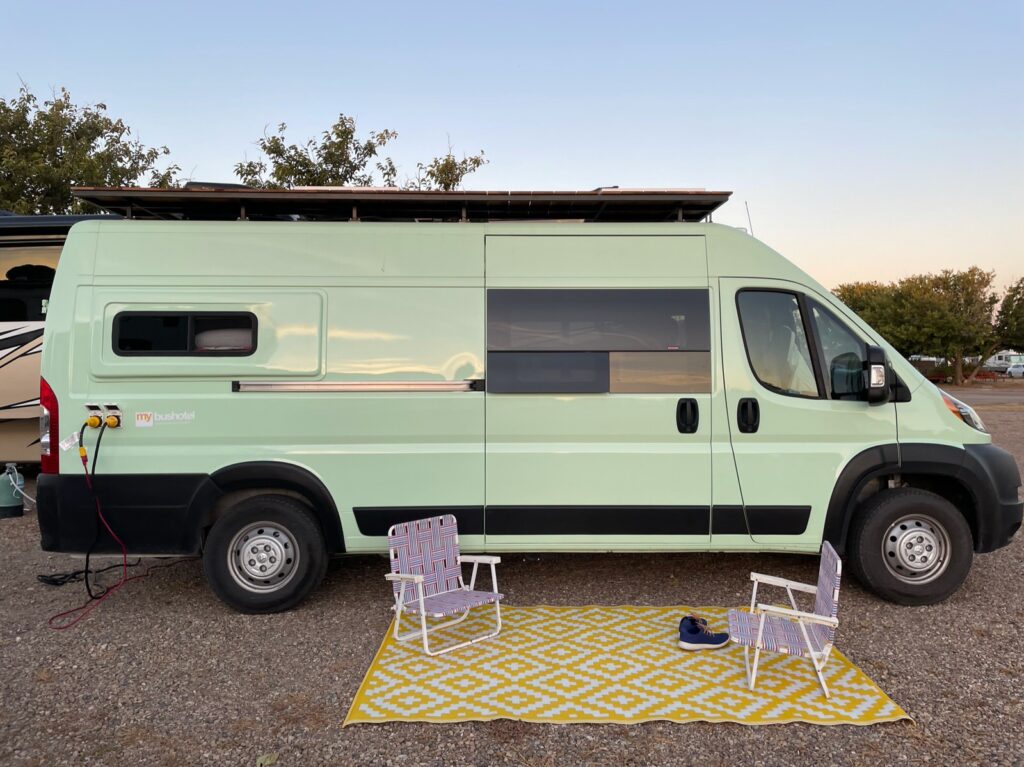 Fallon candidly described having their new van as akin to having a newborn — as in, what the heck do we do with this thing?

It’s safe to say that the couple’s transition to being vanlifers had some initial surprises. Still, Fallon tells us that it actually changed her “fundamentally.”

In spite of having some not-so-funny-in-the-moment moments, like getting covered in gray water or forgetting to turn off the water pump for the shower, Fallon says these were learning experiences that ultimately had an unexpectedly positive impact. “Because of the van, now I’m just like, ‘Okay, something happened, but it’s not the end of the world’,” she said. “I used to be super plan-oriented; everything had to be perfect. The van has given me the freedom to just go, ‘Okay, let’s do it’.”

Another unexpected benefit of being vanlifers came when Hurricane Ida hit the couple’s hometown in southern Louisiana in 2021. Fallon and Justin had just taken delivery of their camper van and hadn’t even spent a night in it yet. In fact, they had their very first trip planned, to Oklahoma City, the same weekend Ida hit. Instead of taking that leisure trip, the couple went on a shopping spree for essential supplies. Armed with water, tarps, and non-perishable food, they made the 14-hour drive back to their hometown.

No one in town had electricity and there was nowhere to stay. Thanks to Joe being an off-grid, autonomous camper van, though, Fallon and Justin remained comfortable near family for a week. Their van, a Be-Home model, has a real indoor shower, LED lights, and air-conditioning. Although their first foray into being vanlifers was a scary situation, it showed the couple how awesome it can be. 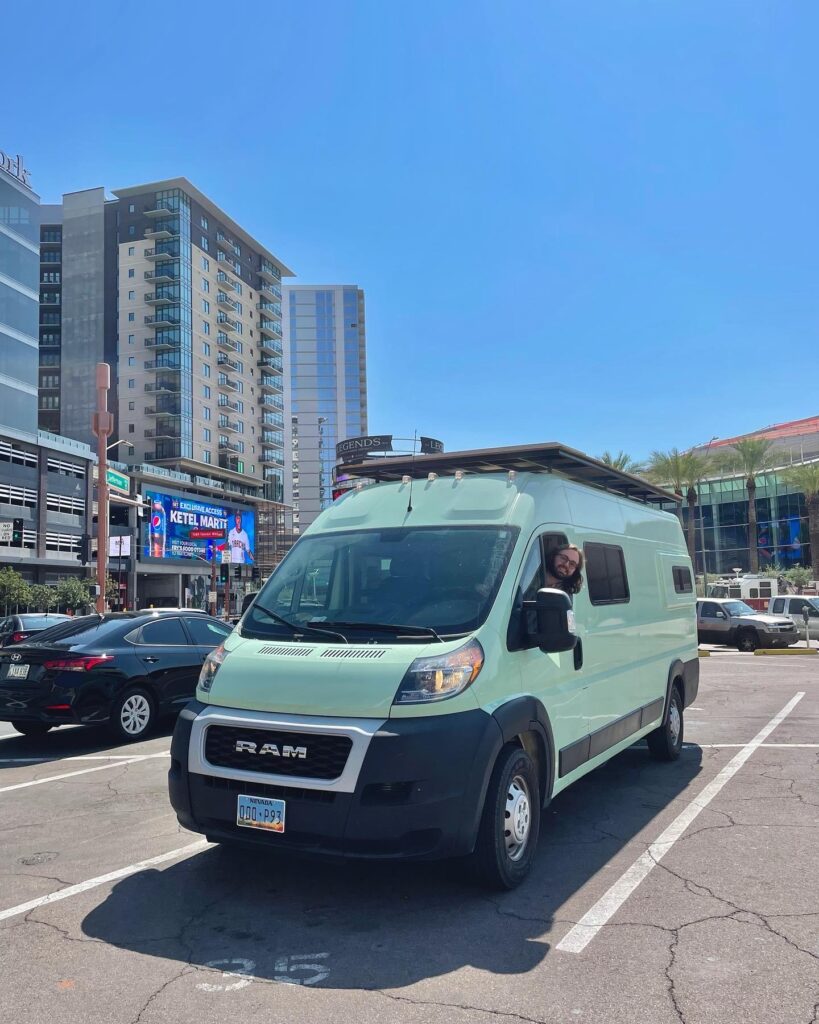 Nearing their one-year anniversary as vanlifers, Fallon and Justin have taken several more trips in Joe. They even occasionally bring their cat along, who unexpectedly loves it just as much as her humans! 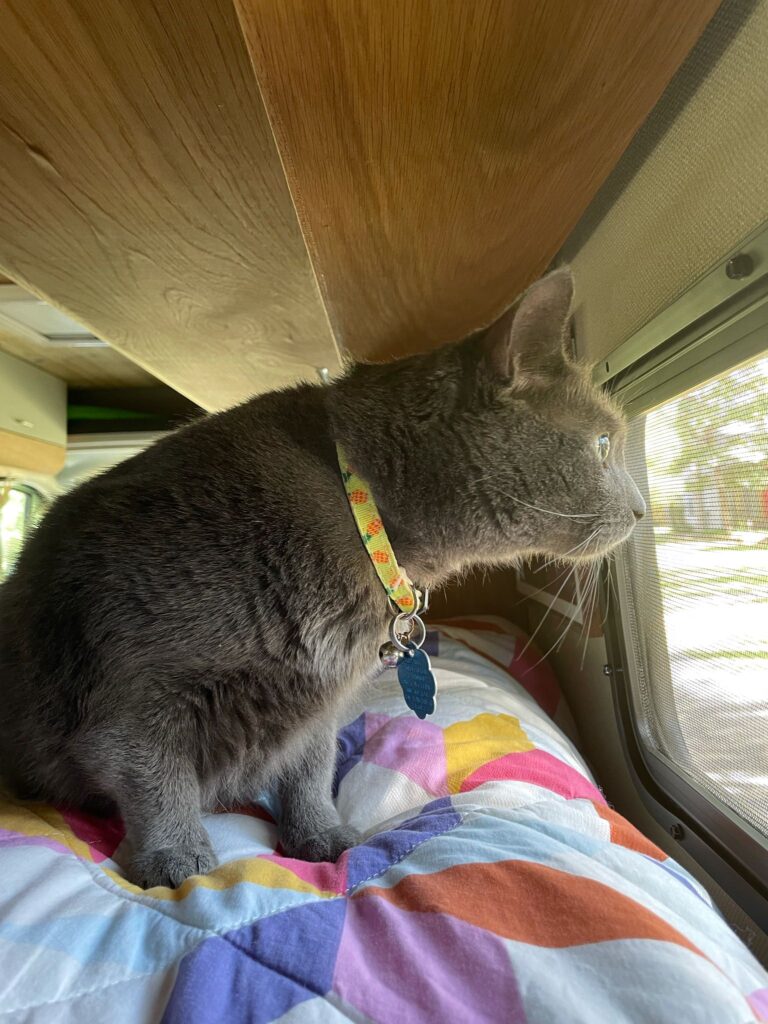 So with more vanlife experience under their belts, what does the couple enjoy most about it?

“The first thing I love most about the van, probably over everything, is how comfortable it is to travel in,” Fallon said. She went on to tell us she gets motion sickness in vehicles, but magically, not in the van. “It’s definitely more about the journey than the destination now, because the journey is so fun in the van.”

Something else the couple enjoys but didn’t expect at all? “Growing a community because we got a van.” They became friends with a mechanic they attend yoga with and Fallon said the van attracts attention every time it’s parked. Some people even stop to check it out when the van is parked in front of their house!

We asked Fallon what it was like learning the ins and outs of the van, especially since the couple had never stepped foot in one. Her response? “It’s so intuitive! That’s why I love your build so much, because you made it for people like us who don’t know what we’re doing. It just works.” 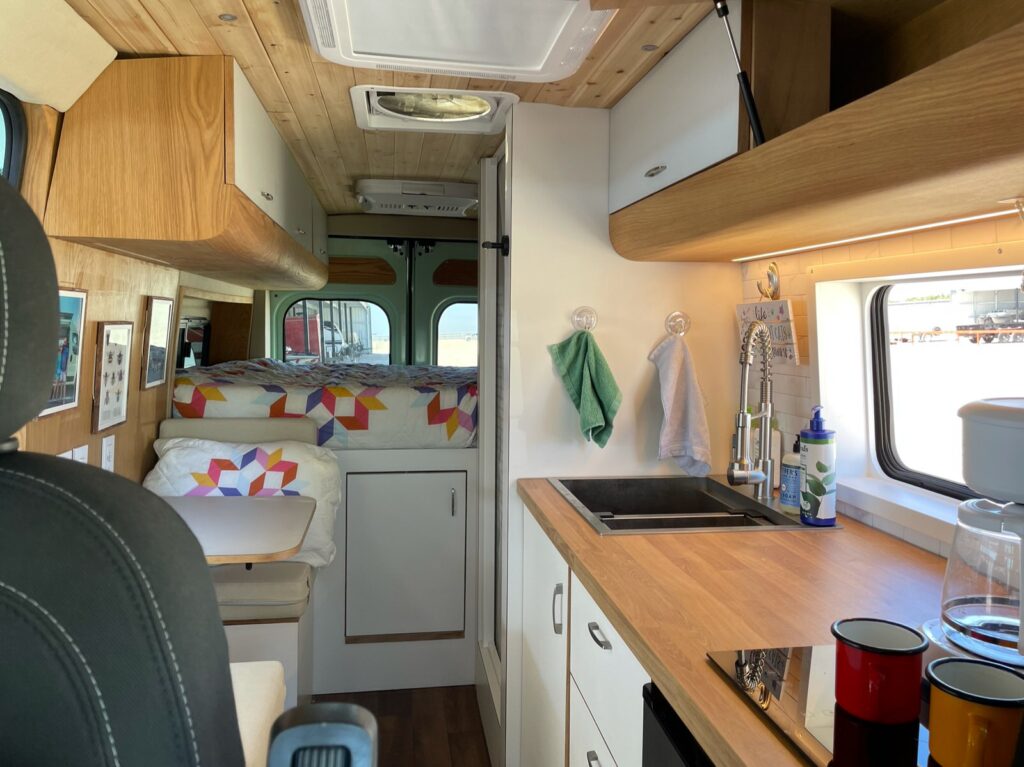 When asked Fallon if she and Justin have any specific destinations on their bucket list, she said, “We definitely want to just see as much as we can.” We can certainly relate to that!

How about the couple’s advice for future vanlifers? “Just chill out. Don’t try to make everything perfect, because it’s so much more fun when things are sporadic. You really do just suddenly end up stopping at this random place and getting all these snacks. Or spending time in a place you didn’t plan to but want to. Just saying yes, I guess, is my biggest takeaway.”

Adding one final tip, Fallon said she highly recommends Harvest Hosts (we do too!). For anyone unfamiliar, it’s a membership-based program that grants access to campsites on private land. Best of all, it’s specifically for vanlifers and other RV travelers! To learn more about the program or sign up for your own membership, read this comprehensive Harvest Hosts guide.

“The Harvest Host experience is perfect for where we are in our vanlife journey right now. I don’t always want to stay off-grid, so this is a very nice middle point,” Fallon told us. She added, “That’s something I definitely would’ve wanted to tell myself six months ago. I can still be who I am, not very outdoorsy, but also enjoy the van. I didn’t have to change and suddenly not want to bathe every night, for example. I’m still able to have the level of luxury that I want, but freedom, too.”

We couldn’t have said it any better ourselves! B-Vans offer exactly that: a certain level of luxury, but freedom, as well. To learn more about our vans (or even just to ask us questions about being vanlifers!), check out our virtual van builder or contact us today.

We’d love to chat with you!

Check out our top 6!
Stories

Every adventure has a beginning

Be part of the nomad world

Stay tuned for the latest news!