A Game-Changer for Digital Nomads

Until recently, being a true digital nomad was nothing more than a romanticized pipe dream for most people. Even self-employed business owners and freelancers have at least occasional deadlines to meet, scheduled Zoom calls, and other time-sensitive non-negotiables.

Starlink for RVs changes that completely.

There is no more traveling somewhere incredible, but constantly worrying about where you’ll next find reliable Internet to work. Starlink for RVs, revolutionary satellite Internet, allows you to travel somewhere incredible and fully immerse yourself in the adventure. Instead of leaving that epic campsite to spend hours inside a coffee shop or public library, Starlink lets you work from your epic campsite.

I recently had the incredible opportunity to travel in one of Bemyvan’s B-Adventure vans for two weeks. It was equipped with Starlink and I truly can’t overstate this fact: Starlink for RVs is an absolute game-changer for digital nomads. Take it from me — I am one. As a freelance travel and outdoor writer, I very literally travel and adventure for a living. A dream job, absolutely, but it comes with tons of deadlines and time spent in places with terrible cell service. Not a great combination.

On this two-week assignment, I worked with a tourism board in Wyoming and then covered the iconic Telluride Bluegrass Festival in Colorado. I traveled from Las Vegas in the B-Adventure van, which had Starlink for RVs. I truthfully had no idea what to expect and I was nervous. Would I miss deadlines? Meetings? If so, what if I fell way behind?

All that worrying was for nothing, as it turned out. I made all my deadlines and didn’t miss any meetings. I even successfully FaceTime’d with my boyfriend, 1,500 miles away. Intrigued? Let’s dive into all the reasons Starlink for RVs is amazing! I’ll also share some important things you should know and a few helpful tips. 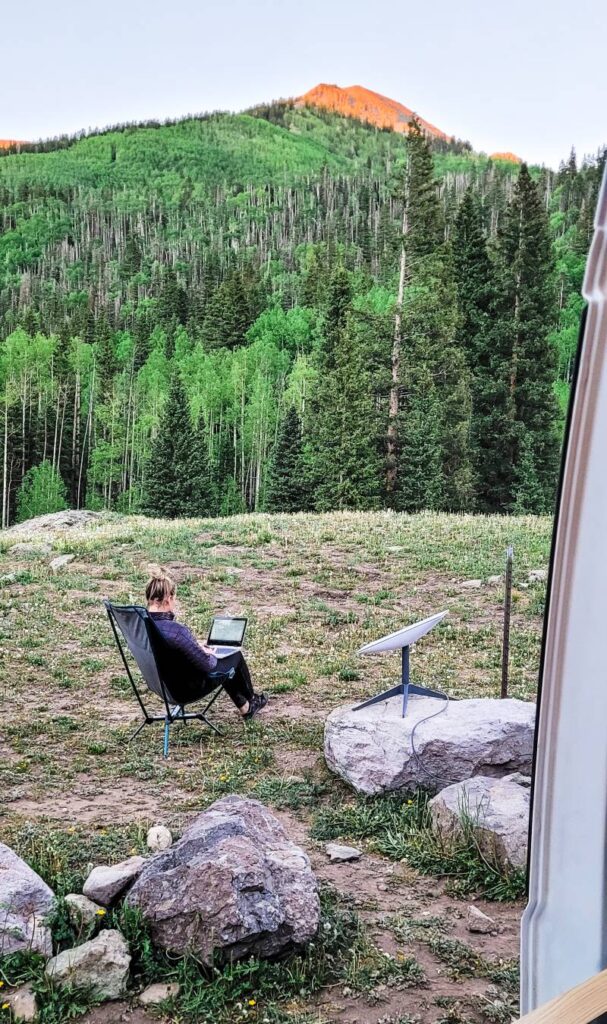 Starlink for RVs: The Basics

In the unlikely event that anyone out there is still unfamiliar with Starlink, here’s a crash course. Starlink is satellite Internet or, as many people refer to it, “Internet from space” (really, that’s actually exactly what it is). If you sign up for Starlink for RVs, you essentially get a portable satellite dish that works with a growing network of space satellites. Starlink specifically provides Internet coverage in ultra-remote areas and those that have historically not had any access to it at all.

The initial satellite and service have been out since late 2020, but Starlink released Gen 2 more recently. Many customers who have been waiting for over a year started receiving their Starlink kits in spring 2022, Bemyvan included.

These Gen 2 satellites, called “Dishy McFlat Face” (absolutely serious — that’s the actual, official nickname), are substantially better than the first generation. They also made some major strides in terms of portability. In fact, in addition to the original Starlink Residential, the company rolled out Starlink RV, or Starlink for RVs. While hardware is the same, the more flexible pay-as-you-go RV service was designed primarily for people who live on the road.

Once you physically have your Starlink kit, it’s just a matter of the initial 15-20 minute setup and voila! On-demand Internet virtually anywhere you need it (with some limitations, which we’ll get into later)! Each Starlink setup has its own ultra-powerful, crazy fast router with a Wi-Fi network you connect to with other devices. That means one-time setup and from there, it’s as easy as using any other Wi-Fi connection. 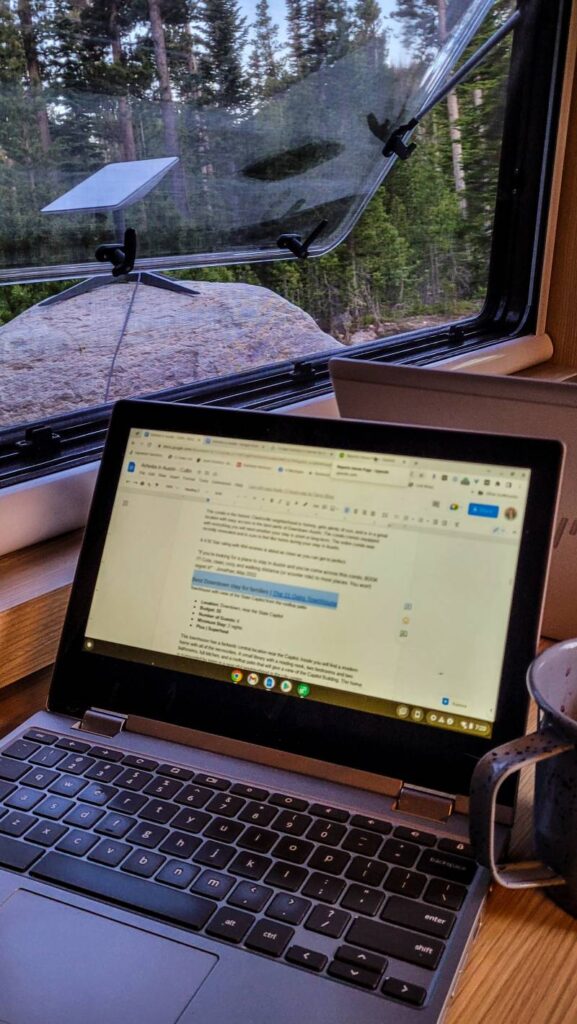 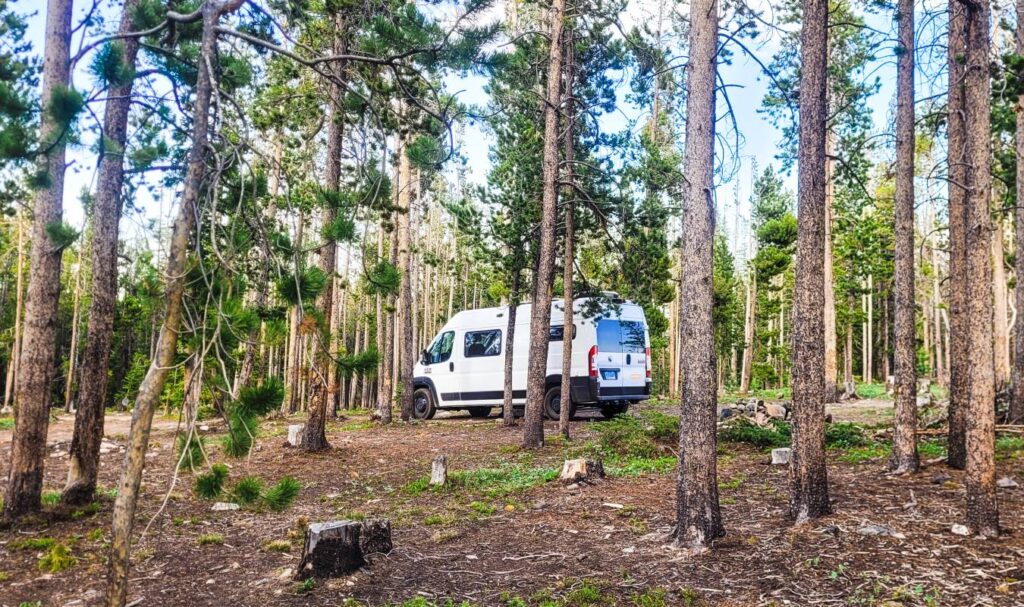 Tips for Using Starlink for RVs 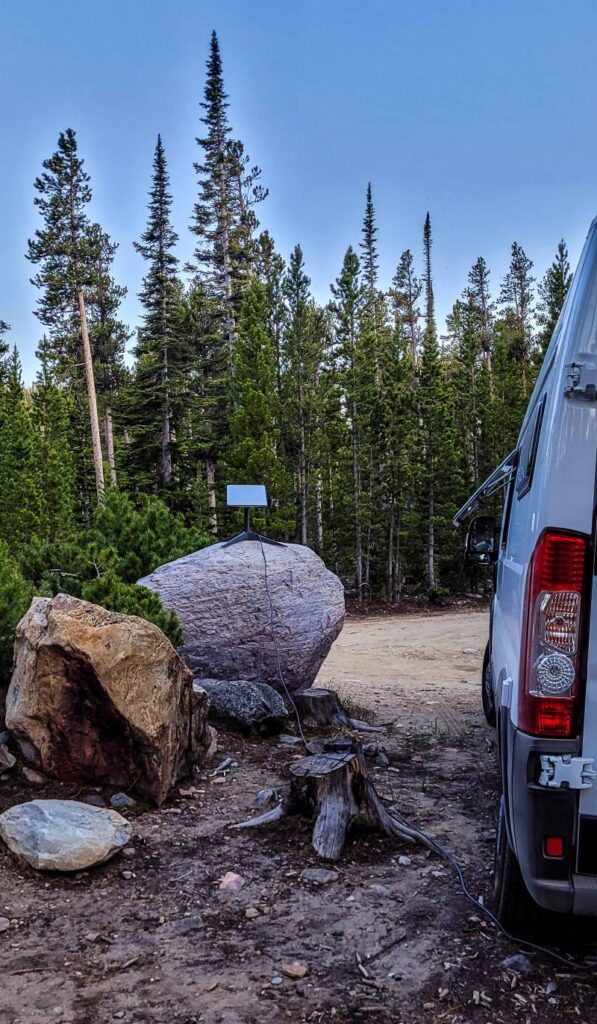 Be a TRUE Digital Nomad With Bemyvan

If you’ve felt called to make a change in your life and become a bona fide digital nomad, there’s never been a better time. Bemyvan is offering Starlink for RVs as an option in its custom builds, taking the term “tiny home on wheels” to a whole new level. This is a fantastic option even for those who don’t necessarily want to live on the road full-time! It’s also great for weekend warriors and folks who want to rent their van out part-time for extra income. The flexibility of having fast, reliable satellite internet on-demand in your van levels the playing field completely.

How many times have you wished you could extend a weekend trip into Monday? Or found an absolutely incredible campsite, but had to leave after a day or two because you can’t be out-of-touch that long? Having a B-Van completely eliminates those concerns!

If you’re even considering it, contact us and let’s talk through your options. We absolutely love helping people realize that a life of adventure isn’t quite as out of reach as it may seem. We also have a virtual van builder on our site, if you’d prefer to configure some different options on your own. Either way, we can’t wait to chat with you!

Book a call with Bemyvan

Be part of the nomad world

Stay tuned for the latest news!